When you are part of a crowd do you feel any different than normal?

Does the crowd bring out a usually-hidden side of you?

If so, you’re certainly not alone. The psychology of crowd mentality is a particularly interesting area of research. A number of theories have been proposed as to why most people behave differently when we are part of a crowd. 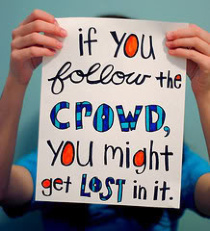 In February 2010, Dylan Yount, a 32-year old man who lived in San Francisco was standing on the roof of his apartment. As he contemplated jumping off the building and ending his life, a crowd gathered. According to several eye-witness reports, certain sections of the crowd began to encourage the man to jump to his death, shouting, “Jump”, “Just do it already”, calling him an “Idiot” and laughing.

Some members of the crowd allegedly videod Dylan on their mobile phones and posted videos and comments on social media. Police at the scene reportedly made no effort to stop the abuse coming from the crowd. Dylan Yount eventually did jump from the building.

It is really difficult to understand how civilized society produced so many people who would behave in this way. We will never know what ultimately drove Dylan Yount to jump to his death, but hearing strangers encouraging him to do it surely did not help. Would any of the individuals who shouted at Dylan to “Jump”, have done this if they were standing alone watching him at the top of the building?

While this is an extreme example of how a crowd can affect an individual’s behaviour, social psychologists have long believed that we do behave differently when we are part of a crowd.

Le Bon (1895) suggested that behaviour observed in crowds could be attributed to individuals being lost in the collective nature of the group, which results in a loss of individual rationality, and a “group mind” forming in its place.

Le Bon believed that it was this loss of the individual self which resulted in individuals experiencing lower levels of personal accountability when part of a group, which culminated in changes in behaviour.

Research on crowd psychology was developed further through theories of de-individuation. Festinger, Pepitone and Newcomb (1952) proposed that individuals did experience a loss of self when in a crowd. However, unlike Le Bon’s belief that this was due to the emergence of a group mind, Festinger et al. (1952) argued that de-individuation was part of a process which took place as an individual became immersed in a group.

Le Bon’s generalised concept of a group mind was dismissed in favour of a process in which antecedents (i.e. anonymity and group immersion), led to a psychological shift towards de-individuation in the group members, which in turn produced an observable change in behaviour in response to the social context of the group.

Further work on de-individuation was carried out by Zimbardo (1969), who studied levels of aggression in female participants who were divided into a group wearing plain clothes and name tags, and a group wearing black cloaks and hoods with no name tags. In the experiment which asked the participants to administer electric shocks (unknown to the participants these shocks were fake) to a learner every time they made a mistake, the group wearing the cloaks and hoods administered shocks of significantly longer duration in comparison to the “plain-clothes” group, suggesting that anonymity did indeed promote higher levels of aggression.

Other studies which appear to support this finding include Mullen’s (1986) analysis of newspaper accounts of lynch mobs which found that bigger crowds displayed higher levels of brutality when killing their victims.

Watson (1973), meanwhile, found that combatants who altered their appearance before going into battle were more likely to kill or torture their victims. 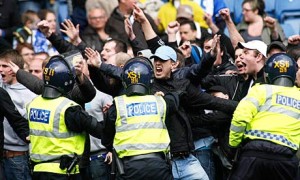 One of the biggest criticisms of Le Bon’s original study of anonymity in crowds was his belief that crowds were antisocial in nature. Le Bon’s dislike for crowds and his belief that they were negative to society meant that his work was not actually based on the experience of crowd members themselves, but rather distant observations from outsiders who were not part of the crowd.

This distant observation was criticised in later studies of crowd behaviour, where again the prevailing view of the crowd was one of disorder and criminality. Further limitations of the idea that anonymity leads to crowds behaving negatively can be found in studies where aggression was not the observed outcome.

A study by Gergen, Gergen and Barton (1973) placed participants in a well-lit room or a darkened room and asked them to describe their experiences after one hour. The participants in the darkened room reported feelings of intimacy and felt more at ease discussing personal issues with their fellow group members. This reduction in inhibitions led to an increase in the level of emotional connection rather than aggression.

This suggests that if de-individuation is the defining factor in explaining crowd psychology, it does not necessarily lead to negative behaviours, but rather depends on the social context of the crowd.

The social context of a crowd is an important aspect of another theory which has been used to explain crowd behaviour. Social identity theory is based on the idea that although we have an individual sense of self, we also have an equally important social self.

Social identity theorists argue that when in a crowd, we experience a shift from our individual selves to a collective self, and our behaviour in response to this shift is regulated by the social norms shared by our fellow group members.

Hollway, Lucey, Phoenix and Lewis (2007) use the example of football fans to illustrate this idea. We are all familiar with the image of fans singing together and waving scarves with their chosen team’s colours. A de-individuation approach to this behaviour would suggest that the fans act this way due to a loss of self and a release from “normal self-restraints”.

However, Hollway et al. (2007) suggest that the football fan immersed in watching his/her team play, experiences a sense of belonging and identifies themselves as being part of the group, and thus behaves according to what the group is doing.

Reicher (1984) studied social identity theory in relation to the riots in St Pauls in 1980. These riots were widely reported by the media to be the fault of a group of young black men. However, contrary to the belief that the riots were an example of unruly, antisocial and irrational behaviour, Reicher found that the damaged buildings were specifically targeted and limited to symbols of authority.

Furthermore, the participants in the riots did not view their behaviour as irrational or negative: they believed that it was a justified protest to police aggression, in a community where relations between the police and young people had deteriorated.

Crowd Psychology: What does it mean for you?

Whether we feel anonymous in a crowd or the crowd becomes a vital part of our sense of self, our thoughts, emotions and behaviours can be greatly influenced by a crowd mentality.

Crowds are a vital aspect of our social world, so being aware of our behaviour whilst we are in a crowd is important. Crowds can be a very positive and enjoyable part of our society if we use them appropriately and remember that we are all still individuals and capable of our own thoughts.

How do you feel when you’re in a crowd?